Astronomical observations have revealed two profound mysteries in cosmology: the existence of dark energy and dark matter. These barely understood constituents of our universe dominate its energy budget. Progress in understanding their nature, as well as mapping the initial conditions of the universe, is the focus of much of the Center’s experimental researchers.  They are pursuing multi-scale experiments aimed at dark matter, ranging from direct detection efforts to the dynamics of galaxies and clusters, gravitational lensing in different regimes, and the cosmic microwave background (CMB) radiation. The Center hosts surveys of galaxies, supernovae and intensity mapping that map cosmic history as far back as possible, and tie it together with the CMB, which is a snapshot of the universe at a fraction of its current age of about 14 billion years. Thus, Penn researchers map the expansion history and growth of structure to probe the evolution of dark energy. More generally they look for signatures of new physics in the dark and visible sectors via innovative data analyses at the intersection of theory and experiment.

The establishment of dark energy in the early 2000’s reframed empirical cosmology. Is the dark energy simply the cosmological constant, or does it evolve in time, or does it indicate a possible breakdown of general relativity? This is a central question at the intersection of fundamental physics and cosmology. In the last decade observations have thrown up at least two further intriguing puzzles that may be related to dark energy and dark matter. The first is called the “H0 tension”, and refers to the fact that the measured expansion rate of the universe is even faster than expected under plausible models of dark energy. A possibly related puzzle is that the universe is more homogeneous than expected. Both puzzles arise when confronting predictions anchored on CMB observations with those provided by galaxy surveys of the late universe.

Penn researchers are at the forefront of these measurements and of exploring resolutions to the cosmic puzzles. They have measured the expansion rate using supernovae and other methods, and they have carried out joint analyses of measurements of mass fluctuations using galaxy surveys, weak lensing and the CMB to provide a powerful probe of the inhomogeneous universe. The coming years will be exciting as these tensions are sharpened and new puzzles emerge from analyses of survey data.

Physics of the early universe

Our universe today is 14 billion years old and expanding. A natural implication is that in the past it was much smaller, and that at its earliest times is was unimaginably hot and dense. Much of the details of cosmic evolution over the history of the universe are governed by physics that took place during this earliest epoch, between the Planckian time and about a tenth of a nanosecond after the big bang. The detailed physics of this era poses critical questions to theoretical physics.

Center researchers are involved in studying every aspect of the early universe, including: the physics of the best-studied model for early evolution – cosmic inflation; competing models to inflation, some based on constructions from string theory; the origin and implications of remnants from particle physics at early times; the generation of the observed asymmetry between matter and antimatter in the universe; the application of field theory techniques to probe and extract the implications of the symmetries of the early universe; and the use of cosmological observations, particularly those provided by studies of the cosmic microwave background and large scale structure surveys, as inputs into new models of fundamental physics.

The fundamental nature of matter and spacetime

Many Center researchers are actively involved in developing approaches to quantum gravity, in particular string theory, and in understanding the implications of quantum gravity for cosmology. They use the cosmos as a one-time experiment that provides clues about how our most complete theories must behave. These efforts are wide ranging, including: formal work in string theory; the development of realistic string theory models; understanding how quantum mechanics might teach us about the origin of spacetime; the development and application of dual models to extract information from quantum gravity models; and understanding the constraints that such high-energy considerations may place on low-energy effective theories. This work connects crucially to the mission of the Center, since the very earliest times in the universe necessarily involve energies and temperatures at which both general relativity and quantum mechanics are both important. 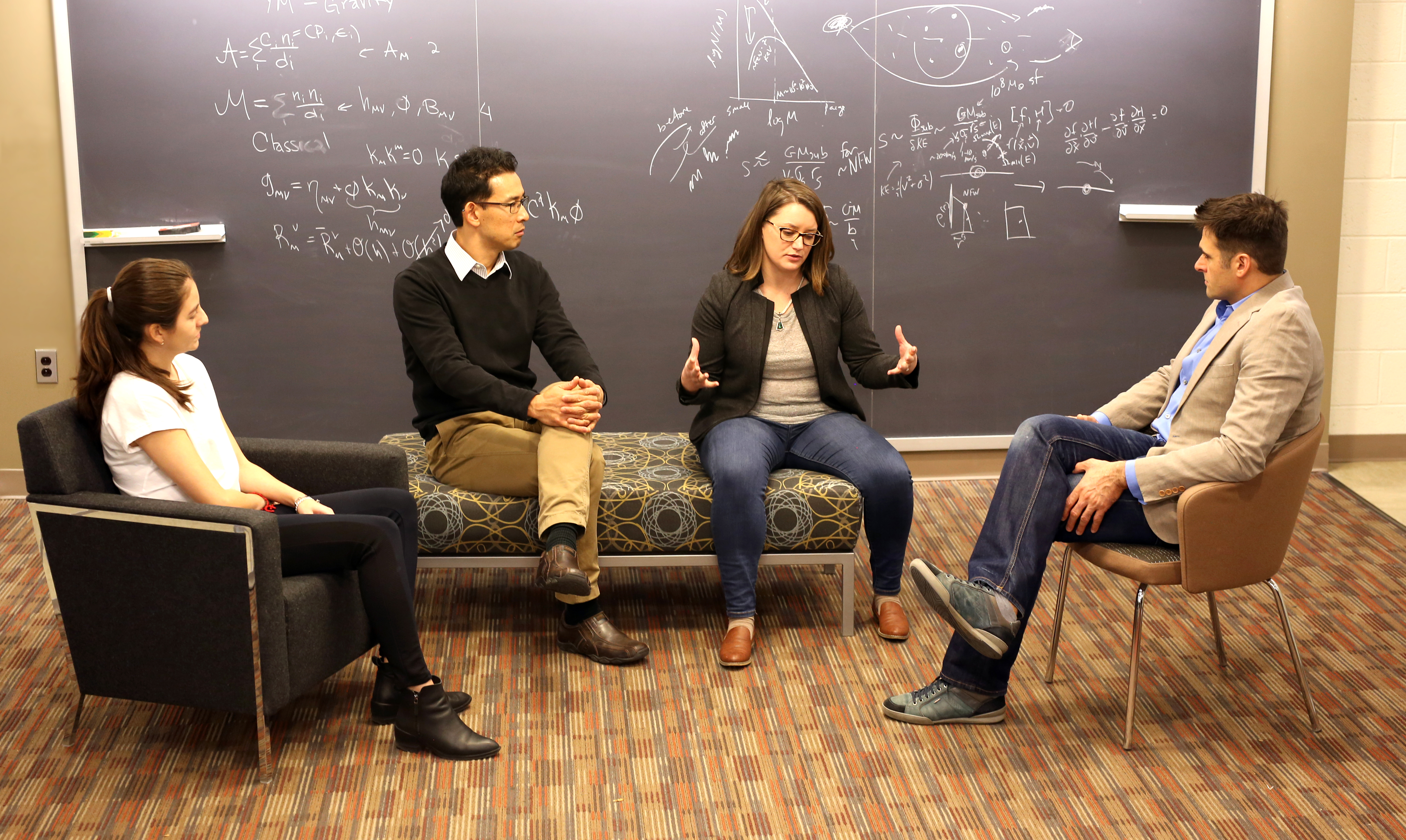 The theoretical studies carried out at the Center are complemented by the exceptionally strong experimental efforts in cosmology and particle physics. A distinguishing feature of our group is the close connection between theory and experiment. Penn is an active partner in a number of cosmology missions, especially in optical and sub-millimeter surveys. These include: