Beyond Einstein?: Gravity and the Search for New Physics 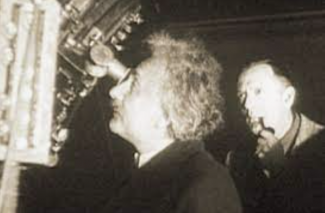 A suite of ongoing experiments are pursuing the possibility that a breakdown of Einstein’s General Relativity might provide our first glimpse into the physics of dark matter, dark energy, extra dimensions, string theory, or other new theories which attempt to solve outstanding puzzles in physics. Watch below as Mark Trodden, Fay R. and Eugene L. Langberg Professor of Physics, Physics Department chair, and co-director for the Penn Center for Particle Cosmology; and Bhuvnesh Jain, Walter H. and Leonore C. Annenberg Professor in the Natural Sciences and co-director of the Penn Center for Particle Cosmology, discuss these phenomena.

© 2021 The Trustees of the University of Pennsylvania
Penn Weblogin