Physicist theorizes that dark matter is a superfluid 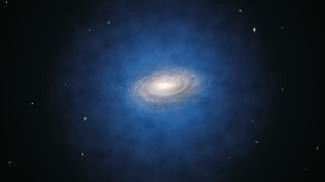 Physicists have been striving to understand dark matter—the invisible material that makes up most of the universe—for decades. In the standard cosmological model, this mysterious substance is a cold, thinly dispersed medium composed of weakly interacting particles, which are considered “collisionless” in that they either hardly interact with each other, or don’t interact at all. Additionally in this model, dark matter keeps the outermost galaxies within galaxy clusters from eluding the grasp of gravity and drifting into distant space, or from being torn apart.

However, a new theory proposed by physicist Justin Khoury, and his former postdoctoral researcher Lasha Berezhiani, now at the Max Planck Institute for Physics, stands to shake up how scientists consider dark matter. Their hypothesis that dark matter is a liquid has the potential to explain cosmological mysteries that have previously eluded researchers. The findings have been published in Journal of Cosmology and Astroparticle Physics.